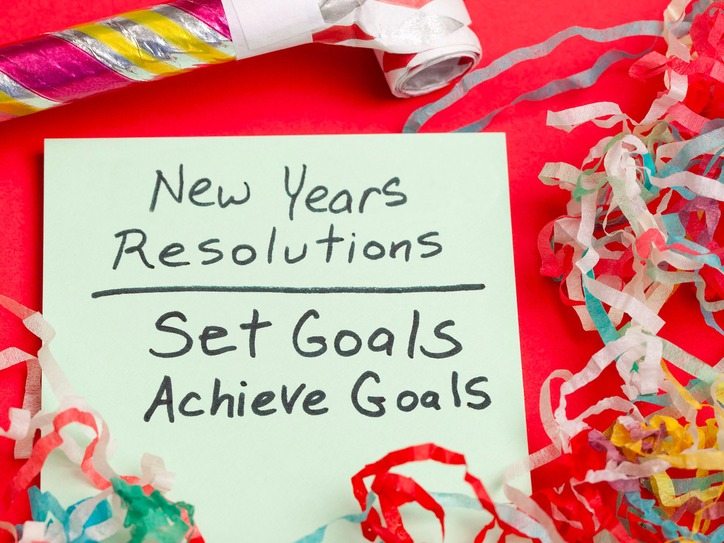 A new year is upon us, and with it comes the butt of many a gym-staff joke: the January –only attendance club! Sad but true, the vast majority of people who set out in the first month of the year are very, very rarely still going strong the by its last. Of course you had every intention of making the effort, but then work caught up with you, you felt like everyone was looking directly at you when you felt out of your depth… and whenever you were supposed to work out, you just felt so darn tired..!  Sure, you made a good show of it the first 4 weeks, but then you found yourself cutting from 2 workouts to 1 per week, then once every 2 weeks, then… before you know it, you haven’t worked out for months, and your new year’s resolution is relegated to mental clutter.

There are a number of pitfalls that befall those who set out on this difficult journey to personal wellness, and knowing what they are might (!) just help you stay on the straight and narrow. Disclaimer: This is just my opinion, based on my experience and observations. If anything I write offends you, sorry – it wasn’t my intention!

There’s a very simple reason why most people who set out to get fit in January tend to fall off the horse by March. Most people who make fitness resolutions that begin from January, typically set that date last August or thereabouts! It’s a far-off place which you can procrastinate about and carry on with an unhealthy lifestyle, all the while telling yourself that you’re safe because you’ll eventually make that vital change. But when January finally rolls around, you’re not mentally prepared, you’re not motivated and consequentially you give up in a short time.

Don’t get me wrong: If you have set January as a month of personal change, by all means go for it! But the fact that you chose January over October doesn’t change the fact that you’re still going to need commitment and discipline to succeed. People make all kinds of promises to themselves over the New Year; this kind of change has to be a whole lot deeper (but we’ll get to that in a bit). New Year resolutions are ten a penny and on their own, they will not see you through.

Last year, I went and saw ‘Thor: Ragnorok’, and like (probably) millions of cinema-going males the world over, I looked at Chris Hemsworths arms and thought: ‘darn, I’d like to have arms like that!’  If this sounds familiar to you, fret not – it just makes you human.

First off, a statement of the obvious:  if you’re a normal human being, you should accept that the conditions of your life most likely do not resemble those of a successful professional actor. They invest huge amounts of time and money looking a specific way in pursuit of their professional requirements. They typically exist within an environment in which the constraints of everyday life are largely a non-factor. Now, there are people who do succeed in transforming their bodies to look like their heroes – but these transformations often come at huge personal sacrifice. Professional (as well as aspirant) bodybuilders, for example, have to commit to a lifestyle that often precludes the possibility of a normal life (and often with severe negative consequences to their health). For people who just want to be and feel healthier, it’s unnecessary and unrealistic.

The crucial problem comes with setting your objectives based on the desire to LOOK LIKE SOMEBODY ELSE. Now, wishing you could look like your Hollywood idol is not a problem; but setting your goals to something as superficial as the image of a celebrity is a hollow motivation that you will, almost inevitably, let slip.

Remember this: there is always a better you inside of the person that stares back at you in the mirror. Most of us will spend a lifetime revealing that you, improving and perfecting it and making it shine. But that awesome, authentic new you actually looks just like you – only better. It doesn’t look like anyone else; maybe nobody’s seen it yet, or even knows it exists.  Whatever it resembles, its true value will be based on how the value that YOU place upon it, and not what others see of it. So focus your efforts on building a better version of you, rather than trying to look like an imitation of someone else!

I recently attended a seminar with one of the foremost experts on training long-distance runners in the United States. He related an interesting story about a client who was sedentary and severely obese. Initially, this client couldn’t run more than 10 meters without running out of breathe. Now you can imagine how humiliating it must be to be so completely out of shape that you can’t run a mere 10 meters without wanting to keel over.

But this particular client didn’t lose heart. Instead, he focused on that short distance, and made it his mission to lengthen it. So, meter by meter, he slowly and steadily increased his endurance.

I don’t know for sure what went through that man’s mind the first day he set out to run and failed so painfully. What I am sure of is that he embraced that small, trivial failure and built a record of small victories on top of it. And that’s the key; every small victory will make you feel a little better about who you are, and what you are capable of, what your potential is. You have to become fixated on the little victories; you have to allow yourself to become addicted to the sense of internal accomplishment that comes with the application of just a little grit, when the going gets tough.

Being healthy and fit will have a profound effect on your sense of physical and emotional well-being, as well as your sense of self-esteem and self-respect; however, the process is long, slow and arduous. For many if not most of us, the journey gets off to a better start when we simply focus on the next step, rather than on that seemingly unattainable horizon.

Now this one is going to sound a little controversial to a lot of people; ‘how can you say the plan is not important?’ Let me explain.

Helmuth Von Moltke is probably not a name you’d imagine to be associated with anything to do with fitness; in fact he was a Prussian Field Marshall who was largely responsible for modern methods of military administration.  I won’t bore you with a history lesson; however, he said something which to this day is repeated constantly and endlessly to soldiers everywhere in the world.

‘No plan survives the initial contact with the enemy.’

The point that Moltke was making, of course, was that success is dependent not merely on an impressive plan, but on adaptability, resilience, fortitude and a robust state of mind.

And so it is with fitness plans as well. The simple fact of the matter is that no matter how well constructed your plan is, it is very rarely perfect. Unlike programming a computer, training plans for humans are rarely uniform because humans, unlike computers, are each unique. The plan WILL change, and if all your motivation was based on successfully executing that plan, it will suffer as a consequence.

Now don’t misunderstand me! Plans are very useful, and as your fitness journey progresses and your goals become more specific, plans inevitably become more important. On the other hand, they aren’t everything, and from a position of personal perspective there is far, far too much emphasis placed on them in the fitness industry. Literally anyone can devise an ambitious plan; what genuinely matters is keeping the plan’s shortcomings or even failure from becoming your failure. You WILL experience setbacks; you WILL occasionally experience disappointment.  Remember: the plan can afford to change; you cannot afford to give up!

This one is a lot less controversial. As your fitness progresses, as your abilities increase and as you become more acutely aware of what you are capable of, you need to find appropriate personal hurdles which you can retrospectively identify as milestones in your memory. Now what these hurdles actually are is entirely up to you; the only real criteria is that they challenge you and that the consequence is a sense of accomplishment. It seems obvious enough, but I can’t stress just how crucially important it is to do this. If you allow the journey to become monotonous, you will find yourself waylaid more regularly than otherwise! Your body may become comfortable with the routine, but your brain will become disenfranchised in boredom; don’t let this happen!

There is no denying that painful or negative memories can have a profound and powerful effect on a person’s motivation. Very often seemingly trivial events like seeing the look on your ex’s face when they see how much weight you’ve put on, can be the final straw that drives us to changes ourselves. By extension, nothing can quite substitute that wonderful moment when all your hard work pays off in the awe-struck gaze of that same ex when they see the new, sculpted physique you’ve built for yourself.

Eventually however, you will come to supersede these temporary motivators; you will embrace your new found identity as a strong, fit individual who looks forward to, rather than dreads, physical exercise; who walks in a confident stride full of healthy and wholly deserving self-esteem; who can politely pass up junk food because it simply doesn’t compliment your lifestyle; who doesn’t mind when your friends tease and mock you with accusations that you ‘have no life!’, because you do have a life, and the life that you have gets better every day; it doesn’t rely on the momentary thrill of a sugar rush but on the lasting sense of wholesome well-being. Before long, you won’t even find yourself craving all those unhealthy things you used to, because your body will know what it needs to keep going. Yes, you’ll actually start craving healthy food!

The key, as I said before, is not to focus on the horizon but on the step directly in front of you; abandon all those mental images of the body that you think you want; change the person you inside and your body will reflect that change. I conclude with the words of a far wiser mind than mine, the American philosopher and runner George Sheehan: