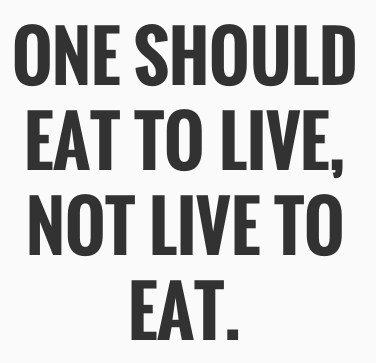 Eat to Live; Don’t Live to Eat – Five factors that could be making you fat.

1)           Social Normality/Expectations: Especially in cultures that promote large families, there tends to be a particularly strong social institution constructed around the dinner table. There’s also generally a strong universal association between a full stomach and a harmonious familial environment. For a lot of people, many of the happiest memories of their lives will revolve around family gatherings over a sumptuous meal. Human beings rightly associate good food with good times. There’s nothing wrong with enjoying the pleasure of good food with close family and friends. The problem begins with the tendency among some of us to try and turn each and every meal in to a festive occasion.

Family life is particularly important in the equation, because it’s generally among your family that you develop life-time eating habits. There are obviously exceptions, however it is generally true that people’s individual weight problems reflect those of their familial environment – fat parents generally have fat kids, to be blunt.

Everyone is familiar with the stereotype of the doting mother who delights in fattening up her offspring; in their adulthood, she always complains that they’re wasting away from neglect; she was always happier when they showed some ‘meat on their bones!’; she’ll always love you ‘just the way you are’. I might be exaggerating a bit, but you get what I’m talking about.  Oftentimes, she’s a bit of a self-neglecting stick figure herself, who spends far too much time fretting over your plate to make sure she’s eating enough herself! Now most of us love our mothers, and most of us, in turn are beloved of our mothers; but the fact that they love you does not necessarily mean that they know what’s best for you (the long-standing social convention notwithstanding). Sometimes, for all that love and affection, it can be very hard for parents to understand or appreciate modern priorities and goals. Sometimes your mom just wants you to be her little boy or girl again. It’s great once in a while, but if it stands in the way of your objectives, you’re going to have decide for yourself what’s more important; while I won’t judge you for choosing your mom’s approval over your goals, don’t come complaining when you’re still fat. I’m not telling you to be rude, dismissive or neglectful of your mom, but you may have to learn to put your foot down.

Here’s something else to think about: it’s also often true that people who eat or drink a lot gravitate toward the company of other like-minded people. This is especially true of people who drink socially; it’s typically exacerbated by the incorporation of foods that combine with libations in the interest of enhancing the experience. Heavy ‘recreational’ drinkers are also typically inclined to ingest foods in the post-binge which are particularly unhealthy. Often this is as much a part of the social ritual as the drinking itself.

If this particular scenario sounds familiar to you, then I suggest that you already know what you need to do. Alcohol isn’t just ‘empty calories’. It’s a toxin. While a small amount of it probably won’t do serious damage to your health or longevity, repetitive binge-drinking can. You’re maintaining a dangerous habit that can lead to more than just unwanted fat reserves; weakened live and heart function, reduced immunity, increased liability to certain forms of cancer, brain damage, etc.

And then, of course, there’s social eating that doesn’t involve reverie. I’ve discussed this issue at some length with quite a number of clients. Lunch break, for example: people who work together tend to lunch as a group, because it’s an escape from the workplace environment, a chance to let your hair down for a short while before returning to the stress of the office or factory or whatever. What this means is that your guard is down. You may have had every intention of ordering something healthy, but then you’re surrounded by friends who are all digging into familiar things and you make the easy decision that your diet can always start tomorrow; you figure you’ll feel stronger about it then.

Getting together with friends and relatives to enjoy a good meal and even a few drinks is something most everyone can and should do a few times a year. But you simply can’t indulge yourself that way every day and expect to remain healthy and fit. Don’t get me wrong: if you exercise rigorously and regularly, you’re going to need to eat a lot of food – but you’ll have to learn to regulate and control your nutritional intake in order to maintain your progress.

2)           Short-Term Compensation:  People with hectic, stressful and/or fluid working schedules often find themselves facing a lack of energy. This is particularly true for people who struggle to keep to regular square meals. By the time they get to work, having either ingested an inadequate breakfast or simply skipped it entirely, they feel lethargic and unmotivated. They find themselves compensating by eating small amounts of high-energy foods. What follows is a metabolic roller-coaster that sees your energy levels spike and then rapidly drop; this can lead to repeat behavior, which perpetuates the cycle. What it means in the long-term is that you’re taking far too many of your calories from foods that should only ever be ingested in small quantities at the best of times. Without consciously realizing it, what you have done is to embrace a high-starch, high-sugar diet – probably one of the most reliable ways of piling on unwanted pounds.

It often starts with a fast-food breakfast grabbed on the go or one of those ridiculous cereal bars that claim to be healthy but are chock-full of sugar; by the time you get to work you put 3 spoon-fills of sugar in your coffee; you top this off with a couple of biscuits from the jar in the office kitchen; in a couple of hours you’re popping money into the hallway vending machine for corn puffs or potato chips. By the time lunch rolls around you’re not really sure if you’re actually hungry or not.

Working life can be hard and demanding. It is, however, never so demanding as to negate the necessity of proper nutrition. By failing to eat a proper breakfast, by failing to eat well-rounded meals throughout the day, you are perpetuating a pattern that does precious little for you in the long-term, but is rife with negative side-effects. I’ve heard this one from clients as well: ‘but I barely eat anything!’ In terms of honest nutrition, you truly aren’t eating anything useful at all; if your primary source of energy is refined sugar and carbohydrates, with a generous dollop of hydrogenated fats (as most junk food is), then it’s almost a certainty that you will get fat!

3)           Emotional Response to Stress: Here’s another stereotype: the recently dumped girlfriend nesting on the couch engorging on a tub of Haagen-Dazs. People deal with emotional pain in different ways. Some people drink; some people workout; some people eat…

There’s no denying that life has its ups and downs. Without wanting to resort to pop-psychology: it’s how you deal with all the downs that prevent or provoke a pot-hole turning into a tectonic fissure. A down-hearted binge of comfort food can very easily turn into a week; a week a month. Before you know it, you feel even worse because the person you see in the mirror each morning looks less recognizable, which can again lead to a perpetuating cycle of self-contempt and compensatory binge eating.  What can exacerbate the problem is the fact that a lot of so-called comfort foods can actually have an overall negative effect on your already frail emotional state because they tend to be high in sugar and low- GI ingredients. Nobody wants to pile mood-swings on top of depression and anxiety.

This might seem disingenuous coming from a fitness professional, but in my opinion the best response to emotional turmoil is simply to get some exercise. It’ll improve your hormone levels, help you release stress; it’ll make you feel better about yourself. What’s also worth pointing out is that when you feel particular low is actually a remarkably opportune time to undertake major changes in your routine and lifestyle – just so long as those changes are positive and beneficial. So if you have just had your heart crushed under a Macadam roller, this might be the best time to commit to a more vigorous lifestyle. Try it and see what happens. You might like what happens next.

4)           Subconscious Habit: When you sit down in front of the television after a hard day’s work, do you find you subconsciously fill your hands with a bag of Doritos and a Coke? If there’s a pack of biscuits in the cupboard, do you find you’re likely to finish it off in one go?

Everybody gives in to temptation and indulges once in a while; the problem is when you mechanically associate leisure time with indulgence. This is something most people with weight problems frequently do, and they do it often without recognizing that they’re doing it. You might be eating relatively healthy throughout the working day, and then get home and guzzle down a whole bottle of soda – and you wonder why you can’t lose weight.

And that leads us to the final factor…

5)           Food Addiction: This is really just an extension of the above point. If you find that you unconsciously consume large quantities of unhealthy foodstuffs on a regular basis, you should ask yourself why you’re doing this, and whether you have the strength of mind to stop.

Quite often, I meet people who tell me that they feel they need to lose weight; they don’t feel good about their bodies anymore and they want to make a change. But when I explain a few simple changes that they can make to effect the desired improvements, they balk and even, at times, become hostile. ‘But I’ve been eating that way my whole life!’; ‘you don’t know what you’re talking about!’; ‘I know my own body; I know what works for me!’ or just flat out ‘no, I’m not giving that up, sorry but it’s just not going to happen.’ (Yes, I have personally heard all of these excuses).

I’m no psychologist, but if there’s an obvious cause to a recognizable problem that you want to eliminate, but you’re unwilling or unable to confront and resolve that root cause, I suggest that you might be subject to an addiction.

Food addiction is probably a bit easier to break than heroin addiction, but you still have to recognize that you actually have a problem. For a lot of people, the suggestion seems too ridiculous to contemplate.  It might not kill you or leave you broke and on the street, destroy your marriage or your family life, but it will stand in the way of you becoming the person you want to be.