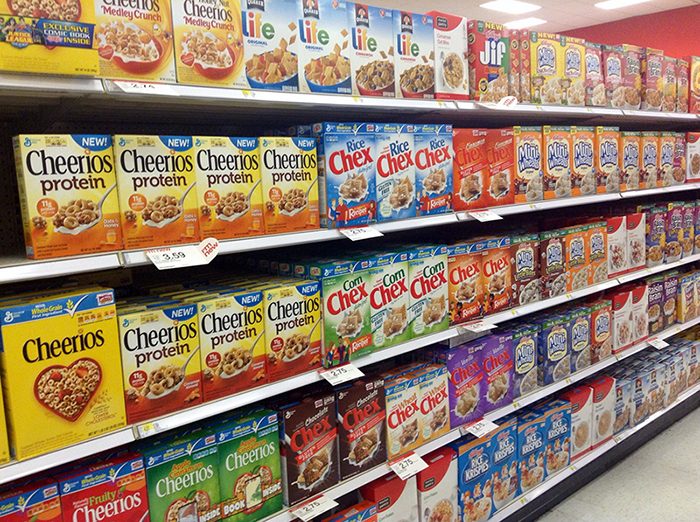 Now, to be fair, Milo can and does have a place in the diet of a healthy person who weight is under control and who genuinely engages in rigorous activities. Chocolate milk has in fact been shown to be ideal post-exercise recovery nutrition – as long as it’s enjoyed in moderation and at the right time. But if your intention is to lose weight, I suggest you take it out of your diet and out of your kitchen post-haste.

Now, I’m not throwing all breakfast cereals under the bus; there are some good ones out there. But have you ever taken the time to look at some of the websites of the most popular manufactures? They’ll have sections referring in rather general terms to the benefits of a cereal-based breakfast, so you’ll feel safe by buying their products; and some of their products genuinely are a healthy option (when combined with sufficient protein). The problem is that most often their most popular products are in fact popular because they are anything but a healthy option. Sure, they might actually have a relative amount of fibre; doesn’t negate the sheer amount of sugar in them, though. In fact, when considered in relation to the overall diet of modern, urban adolescents, I would have no reservations about arguing that commercial breakfast cereals probably contribute significantly in relation to the global epidemic of childhood obesity. So take all that chocolatey, frosted goodness and throw it in the garbage – and that probably applies even if you don’t have a weight problem!

The basic rule-of-thumb with breakfast Cereals is this: The lower the number of ingredients and amount of processing, the better. So things like Shreddies and Weetabix constitute healthy choices; cheerios and bran flakes are not bad either. Avoid Frosties, Koko Crunch, Honey Star and similar products like the plague if you’re battling your waistline!

But that’s not my problem with it. My beef is with just how much of the commercially available milk on the average supermarket refrigerated shelves is actually sweetened! Or worse, when it’s been artificially thickened! No, it doesn’t taste better or creamier! Why couldn’t they just put regular milk in the damn carton? What kind of world are we living in where children have to have their milk sweetened!?

Which leads to my issues with both soy and almond milk: both actually are healthy alternatives to dairy – in theory. But have you ever actually tasted either soy milk or almond milk WITHOUT sweeteners? Hint: it’s just soy or almond flour mixed in water. Nobody would actually pay for it if they didn’t sweeten it. So if you thought that switching to either commercial soy or almond milk was a good idea while watching your diet, think again! Seriously, you’re better off just drinking skimmed milk or better yet, sticking with water.

Pure fruit juice has a minor edge over commercial carbonated drinks because of the higher nutrient values; on the other hand, the sugar levels will be almost identical, so for weight-loss, this one is a gigantic pitfall! And, just like milk, commercially available fruit juice is not only massively diluted but often (heavily) sweetened, not to mention artificially flavored.

As a pre-workout booster, or included in a post-exercise recovery meal, a measure amount of fruit juice certainly has its place. But if you make a habit of drinking it with every meal or simply replacing carbonated drinks with it, you’re basically taking one step forward, and one and a half steps back. Instead just have an apple!

‘Giving up smoking (insert preferred vice here) is the easiest thing in the world; I know, because I’ve done it thousands of times.’